Leisure tourism might not be the first phrase to come to mind when one thinks of Saudi Arabia, but the kingdom is working to change that.

Under the ambitious Vision 2030, the kingdom has been gradually driving its efforts away from oil-rich profits and putting forth a more diverse economic strategy. To do so, the nation has been strengthening many of its non-oil sectors, and the tourism industry is a prime example.

Among the key goals under Vision 2030 is to increase the number of tourists who visit Saudi Arabia and the revenues generated from the sector to 18 percent in the next 14 years, with a particular focus on leisure tourism aside from its religious counterpart.

Here are four ways the kingdom is pushing its tourism industry forward:

The kingdom rolled out tourist visas for the first time

Back in September, Saudi Arabia announced that tourists from 49 countries can start applying for visas through Saudi embassies and consulates across the world. Prior to that shift, visas were almost exclusively available to pilgrims, business people with local sponsors, and family members of residents.

Citizens from countries such as the United States, Canada, and the United Kingdom are now eligible to apply for e-visas and visas on arrival, with processing time ranging from 5-30 minutes for the former and 1-2 business days for the latter.

And loosened its legislative restrictions on tourists 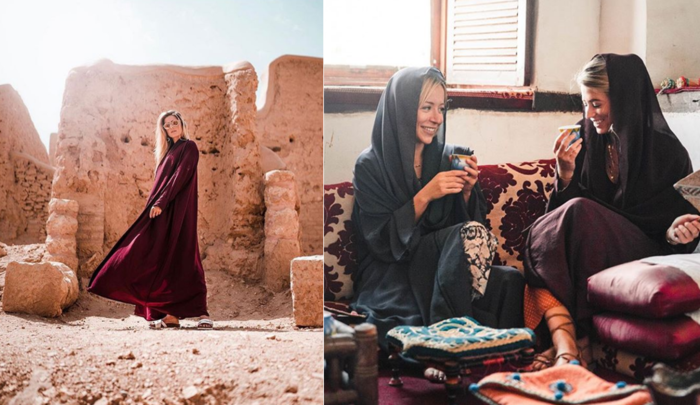 Saudi Arabia has loosened some of its regulations in a bid to attract foreigners to the conservative kingdom.

In September, upon announcing its new visa program, the kingdom announced that female travelers will no longer be required to wear the once-mandatory abaya while roaming the streets, but they still need to wear "modest clothing." It is worth noting that the dress code inspired by Islamic Sharia will still be imposed on female Saudi nationals.

That's not all. Earlier this week, the kingdom revealed that foreign men and women no longer need proof of marriage to share hotel rooms, which means unmarried couples are now allowed to book rooms together.

Also, women, whether local or foreign, no longer need a male guardian's presence to book and stay in hotel rooms.

Saudi Arabia has been hitting both the entertainment and tourism sectors with one stone: Top-notch entertainment.

Over the past year, the kingdom has hosted a number of events, mainly concerts and sporting competitions, and welcomed tourists wishing to attend them with minimal hassle.

Towards the end of last year, the kingdom announced it would begin offering electronic visas for foreign visitors planning to attend sporting events and concerts. In December, the kingdom launched the visa service for visitors for the motoring event Formula E, which welcomed 1,000 tourists from 80 countries. This was also the case over the summer when the Jeddah Season festival saw attendees from abroad be granted visas online upon purchasing their event tickets. Such events have seen the kingdom loosen its gender-segregation regulations, allowing men and women to enjoy the festivities side by side.

Plus, the kingdom is set to become home to its first theme park, Six Flags Qiddiya, which will feature record-breaking rides and attractions as of 2023.

Not to mention the increased focus on accomodation

Saudi Arabia is set to witness an increase in the number of hotels and resorts in the country.

In 2017, the kingdom announced its plans to transform the Red Sea coast into a luxury beach destination governed "by independent laws." The project aims to transform Saudi Arabia's Red Sea coastline into a global tourism hotspot, with luxury hotels and pristine beaches. Construction work on the project began earlier this year. The first phase is expected to be completed by the end of 2022, including the development of hotels and luxury residential units, as well as all logistical infrastructure - including air, land, and sea transport hubs.

Has the kingdom's tourism push been paying off?

Back in April, real estate giant Colliers International revealed that international arrivals to Saudi Arabia are expected to increase 5.6 percent per year — from 17.7 million in 2018 to 23.3 million in 2023. According to the company's research, the kingdom's travel and tourism sector is projected to contribute $70.9 billion in total to the country’s Gross Domestic Product (GDP).

On Monday, the Saudi Foreign Ministry announced that 24,000 foreign visitors entered the kingdom within the first 10 days of implementing the visa-upon-arrival system at Saudi airports. China tops the list of countries these visitors come from, followed by the United Kingdom and the United States, according to Arab News.

However, Saudi Arabia's efforts are not above criticism. While the kingdom has amended many of its controversial laws, particularly when it comes to women's rights, there's more to be done for Saudi women. This, coupled with the loosening of some restrictions exclusively for foreigners, sheds light on the importance of taking the necessary measures to fulfill Saudi women's right to full autonomy once and for all.